Handmade cheese in the heart of Manhattan (Video)

Beecher’s: handmade cheese from the heart of Manhattan

The Flatiron district, in the heart of Manhattan, inspires visions of fast paced lifestyles and cutting edge urban activity. The location is where countless individuals flock to, in the course of their bustling international affairs. It isn’t quite where one would expect to find a remarkable hub of artisanal cheese.
However, people soon learn something new, when they walk into the sturdy stone building which houses Beecher’s Cheese.

It’s about local food, and it’s about creating food by people who have passion for the product they’re making. -Andrew Torrens

This shop is the flagship store for this Seattle company, in New-York state. Beecher’s handmade cheese is an avant garde fromagerie at the crest of artisanal cheese making in the United States. It is unique and stands to represent the beauty of true quality american cheese. The establishment’s founder, Kurt Beecher-Dammeier is a natural born cheese enthusiast. Born into a family where his grandfather would regularly buy full stilton wheels, he always cultivated his love for cheese, and not the processed one, much rather authentic cheese. 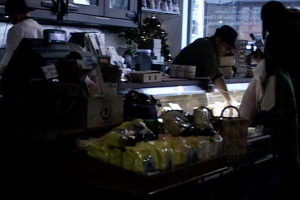 From Washington state to New-York

In 2003, the first Beecher’s Handmade Cheese shop was opened in Seattle, in Pike place market. The venture was a success at conveying it’s owner’s love for cheese. The originality of the concept is the fact that cheese is made in situ, and the facilities are surrounded by glass walls through which the public can peer, observing the process of artisanal cheese creation. However, beyond the distinctiveness of the location, there is a true caring for the quality of the product and a minuteness of detail in the actual process. This cheesemaker chose to work only with local milk originating from a herd of cows to which no recombinant bovine growth hormones are given. Also, any cows being treated with antibiotics are excluded from giving milk for the production of Beecher’s Handmade Cheese. At the end of the line, all cheeses are pure foods, exempt from undesirable additives such as bovine growth hormones, polysorbate and nitrates. The result of this scrupulous work was quickly recognized and adopted by the inhabitants and visitors of the Emerald city.

In 2011, after many awards for his cheeses, Kurt Beecher-Dammeier opened the now famous Beecher’s handmade cheese location in New-York city. The cheese making facility is once again visible to the public through glass walls inside the store, as well as from the street. It is housed in a massive sone building, and serves as a cheese producing area, a store, a café, as well as a restaurant focusing on cuisine incorporating Beecher’s products. The result is quite impressive, visually speaking, with a refined New-York style design signature. 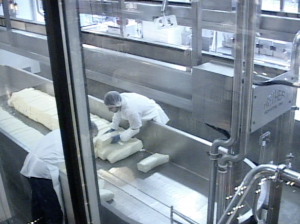 As Beecher’s Handmade Cheese takes pride in all the steps involved in producing their cheese in Seattle, the same care is put into the NYC production, overseen by Andrew Torrens, head cheesemaker. For him and his team, passion and quality always come first. The milk comes from healthy cows exempt from bovine growth hormones and antibiotics. It comes from herds of Jersey and Holstein cows that are very close, in the countryside adjacent to Albany. It is delivered every day of the week to the Beecher’s vats. With this fresh, quality milk, two main styles of cheese are made: Cheddar and Monterey Jack. However, even with cheddar being quite common, they specialize in artisanal cheddar, sometimes making the clothbound type, one which is wrapped in cloth, to regulate the wheel’s release of moisture, making sure the aging cheese has the right amount of activity that will give it it’s distinctive taste. The most representative of all their cheeses is the Flagship: a very tangy cheddar aged for 15 months in their cellars. A sheep’s milk version of the cheese is also made: the Flagsheep. The two are definitely worth a try as they surpass most common cheddars found on the market in the state, even british ones.

One of the interesting facts about this establishment is that it is constantly experimenting. In addition to the standard cheese making vats, there is also a smaller one, used for making smaller batches of cheese, allowing Andrew Torrens, the head cheese maker of the New-York location, and his coworkers, to constantly improve their cheese and develop future classics.

A fascinating section is found in the basement, where the restaurant is found, and appropriately named The Cellar. This restaurant has a menu revolving around braised meats, local produce, as well as the artisanal cheeses and charcuteries found in it’s store. It gains it’s name from the fact that some of their cheese wheels are aged on the spot. Certain wines are equally aged in it’s cellar. The cellar has windows showing the very humid area where the cheese ages. It surrounds the dining area and is quite captivating as one can witness the different seasons of a wheel’s maturing process. At one end you have the young cheese, fresh looking, and moving on to the next columns, the cheeses are gradually colonized by beneficial micro-organisms. After more than a year, the senior wheels are looking wise, and ready for a taste. 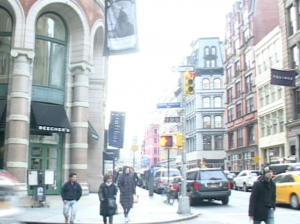 Commited to making a positive difference

Beecher’s Handmade Cheese is a wonderful store to go to for the cheese enthusiast, but also for the enthusiast of local foods. Indeed a vast array of local products are found in the retail section of the store, all coming from small or medium sized producers, most of them originating from the East Coast of the USA. Alot of them come from New-York state, and all of them come from the United States. There is an obvious care given for showcasing the best of what American artisanal food producers can make. Thus, it is also a great location to sample high end charcuteries, cheeses, chocolates, and all sorts of foods and beverages, not to mention the world’s best mac and cheese.

Kurt Beecher Dammeier founded a great american way of making cheese in 2003. One can sense the attention given to being a generous enterprise, as Beecher’s helps local milk producers and local quality food producing businesses. The Pure Food Kids Foundation is another offshoot of this company who’s mission is to “change the way America eats”. Through this initiative, schoolchildren are educated in the need for true foods in their daily habits of nutrition. It is another way of giving back to the community while helping to encourage the love and knowlege of authentic, healthy foods. One can only wish all the best for Beecher’s Handmade Cheese, a unique company which has a healthy, generous and hearty future in front of it.