Sainte Chapelle, from the depths of medieval Paris (VIDEO)

One of the most visited national monuments in France today, the Sainte Chapelle is a medieval architectural jewel that is only partially visible to passers-by at street level. Indeed, one must enter the precincts of the Palais de Justice in Paris to gain access to it. This jewel of glass, stone, wood and metal was, once upon a time, inside the walls of the Palais de la Cité, home of Louis IX, his family and his entourage. The place has gone through time and almost didn’t make it to our period. Had it not been lucky, it may very well have made it to be a subject of our “hindsight chronicle”.

Following the April 2019 fire at the Notre Dame Cathedral in Paris, visitors looking for a crucial place in medieval Paris discover and rediscover the Sainte Chapelle du Palais. Although the Palais de la Cité no longer exists, this high place of Paris is nevertheless still nestled in the protective embrace of the Palais de Justice, which tends to moderate the crowds, although long lines do not spare this ancient place of worship.

It is, however, a small construction, whose heights can be seen to exceed the surrounding buildings. However, a certain force attracts so many people, that of the color, the light and the history. Louis IX, the only canonized king of France, was involved in the design of the Sainte Chapelle, whose architect is not known today. He wanted to create a place with a certain intimacy, conducive to allowing guests to meditate. That is why there is no door leading directly to the upper chapel. One must first enter the lower chapel. From there, everyone must take a small stone staircase to go up and another to go down. This is a deliberate effect, preventing the effect of mass circulation of people. 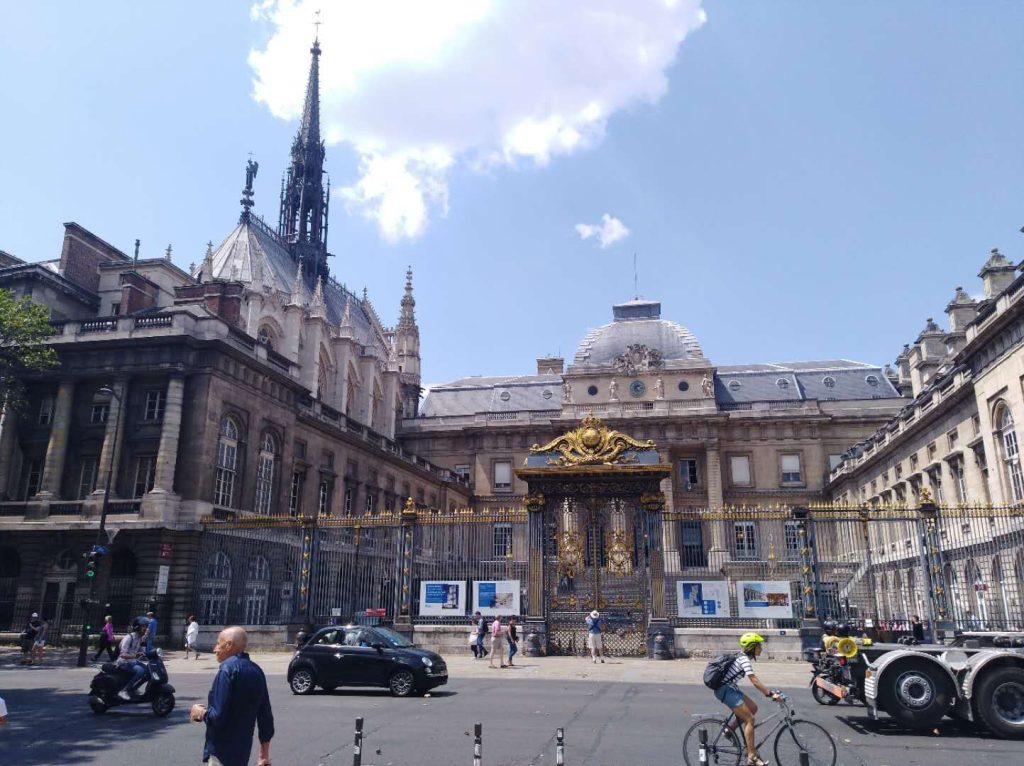 The Sainte Chapelle, visible to the left, inside the courthouse compound.

It is paradoxically thanks to the Bulgarians of the dynasty of Assenides, as well as the Byzantine Greeks, that the Holy Chapel was erected. In the 1230’s, Ivan Assen II, king of Bulgaria got closer to the Byzantines of Nicaea and allied himself with John III Doukas Vatatzes. They besieged Constantinople in 1235 and 1236. It is on this occasion that Baudoin II de Courtenay, last Latin emperor of Constantinople, goes to Europe to ask for help.

In France, Louis IX refused to send troops. On the other hand, he wanted to bring to France the famous Holy Crown, in possession of the Latin Empire since the sack of Constantinople, where the Latins had plundered from Boucoleon palace, where the Byzantine Emperors had brought it from the Basilica of Mount Zion in Jerusalem, around the 6th century, where its presence was attested since the end of the 4th century.

This alleged crown of thorns of Jesus Christ was pledged by the emperor Baldwin de Courtenay against a monetary loan from Nicolo Virino, a merchant from Venice. The contract stipulated that the latter would become the owner of the crown if the loan was not repaid by June 1239.

Saint Louis then began negotiations that lasted two years, in order to ensure that it was indeed the said crown, originating from the Mount Zion Basilica. At the end of these negotiations, the king of France agreed to pay 135,000 livres tournois, a sum that was about half the budget of the royal domain at the time.

The Crown of thorns arrived in France in August 1239, in Champagne. Louis IX went there, according to the popular account, barefoot, accompanied by his mother, Blanche of Castile, and his brother. The seals were checked, and Louis affixed his own. The Holy Crown was the most important acquisition, the one whose trace is clearest in history. Other relics, known as the Passion relics, were also purchased in the following months.

The king then planned to build a chapel to house these sacred objects. The plans were drawn up for a palatine chapel, that is to say, one located inside the Palais de la Cité, the most frequent residence of Louis IX and his family, on the Île de la Cité in Paris, a palace that has now disappeared, the only remaining pavilion of which is the Sainte Chapelle. 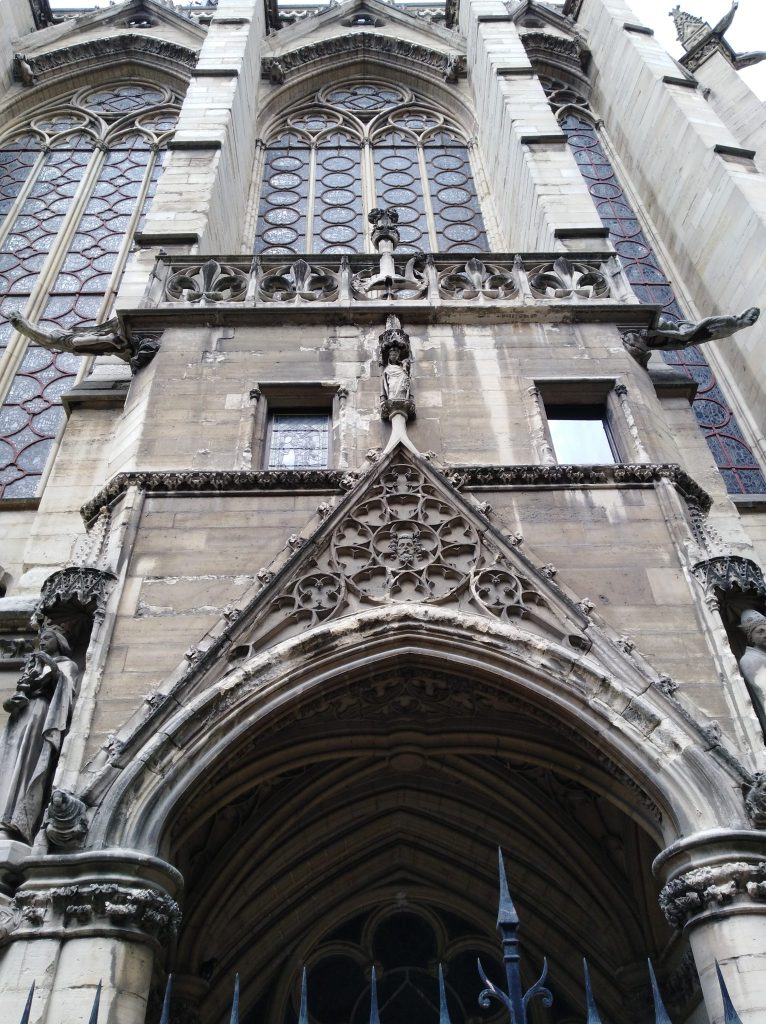 The chapel was built in less than seven years. This rapidity testifies to the important financial means of the sovereign. As the visitor can testify today, the execution of the work will nevertheless do everything to perfect the architecture and the beauty of the place. An intimate place was created, suitable for prayer and meditation, above all for the royal family, their guests and the palace staff, with an obvious emphasis on light through immense stained glass windows.

This construction is striking for its height, being in fact three times as high as it is wide. The lower chapel has some stained glass windows, its ceilings with complex arches are decorated with fleur-de-lis. There are a few pretty stained glass windows, but it’s only once the visitor has climbed the spiral stone staircase that he is struck by the magnificence of these glass heights.

Each stained glass window rises to a height of about fifteen meters. The walls are almost entirely made of stained glass, separated by fine colonnades. The effect intended by the designers was to transport the public to polychrome heights conducive to a certain intellectual stimulation. A luminous and celestial atmosphere is always present: the building seems to be suspended. 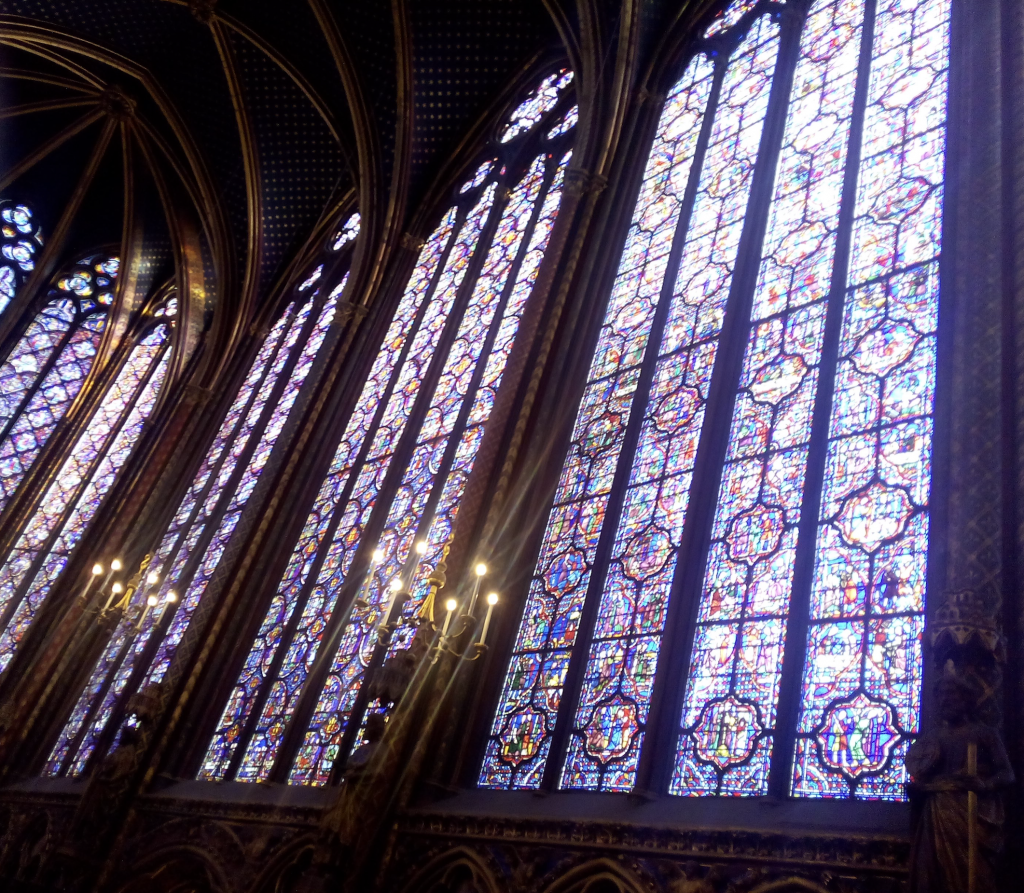 The magnificent stained glass windows that make up most of the walls of the high chapel. Photo: © GEC

In order to achieve this result, a new technique was used, to reinforce the fragile structure resting on very thin columns. No interior columns exist. Instead, the builders installed a metal chain-link to hold the building together. There are also struts to support the opening of these huge windows, but these are joined to the horizontal iron bars that run through the stained glass windows, and are therefore almost invisible. The metal chaining was a feat and a technological innovation for that time. It was the first time that this technique was used in this way. It was not until the late 1800s that it was used again.

The stained glass windows of the Sainte Chapelle are a work that can be read like a book. Composed of biblical scenes, they tell the story, from the genesis to the arrival of the relics in Paris by Saint Louis. A rose window was then created in the 15th century on the west side of the chapel. This last one concludes the work and represents the apocalypse and the last judgment, through its scenes in the shape of a flame.

These stained glass windows have subtleties within the glass itself, visible in the expressions of the faces and bodies represented. The faces are very fine and emanate very significant looks that are best admired in person with a certain slowness. In order to observe them well, the wise guest should bring binoculars or opera glasses. The work is a literature in images. These mnemonic scenes are read from bottom to top, and from left to right. 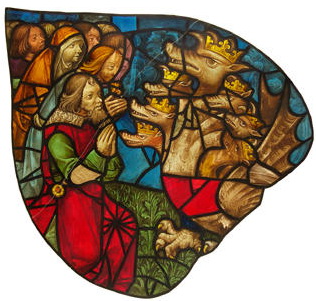 This magnificent building has stood the test of time, but it came extremely close to being destroyed by water, fire, or human stupidity. A fire in 1630 destroyed the spire of the Sainte Chapelle, which was built in 1460. A flood in 1690 and a fire in 1777 threatened the chapel once again. The chapel survived these disasters.

However, it was during the Revolution that the Holy Chapel suffered the most damage. The shrine containing the Holy Crown was melted down for its precious metals. The building itself was threatened with demolition and almost ended up like many other churches in France, all razed at the time. Most of the statues inside were destroyed. Worship was forbidden and the place was given a judicial administrative vocation. 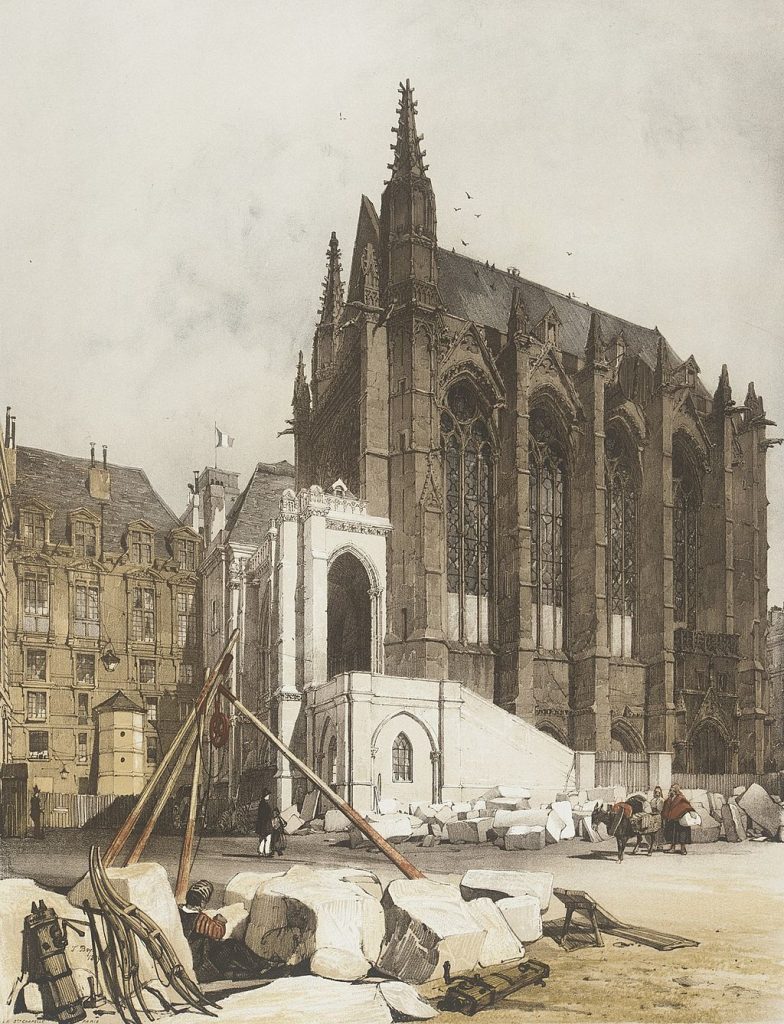 The Holy Chapel, at the time of its restoration.

The spire, which disappeared in the 14th century, in the 15th century, in 1630, and again during the revolution, was finally restored in 1855. This spire was shown at the Universal Exhibition that year, causing the admiration of many illustrious visitors. It is a technical feat, because it was built by Jean-Baptiste Lassus, following an archaeological reconstruction based on period documents, then placed on a vault of only 15 centimeters thick, without a transept crossing.

This technical achievement was celebrated by many at the time. The spire of the Sainte Chapelle was the primary inspiration for Viollet-le-Duc, when he composed the famous spire of Notre-Dame de Paris, which disappeared in April 2019, in the infamous fire. 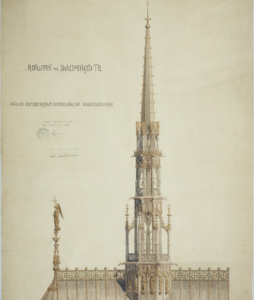 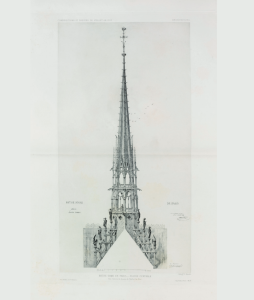 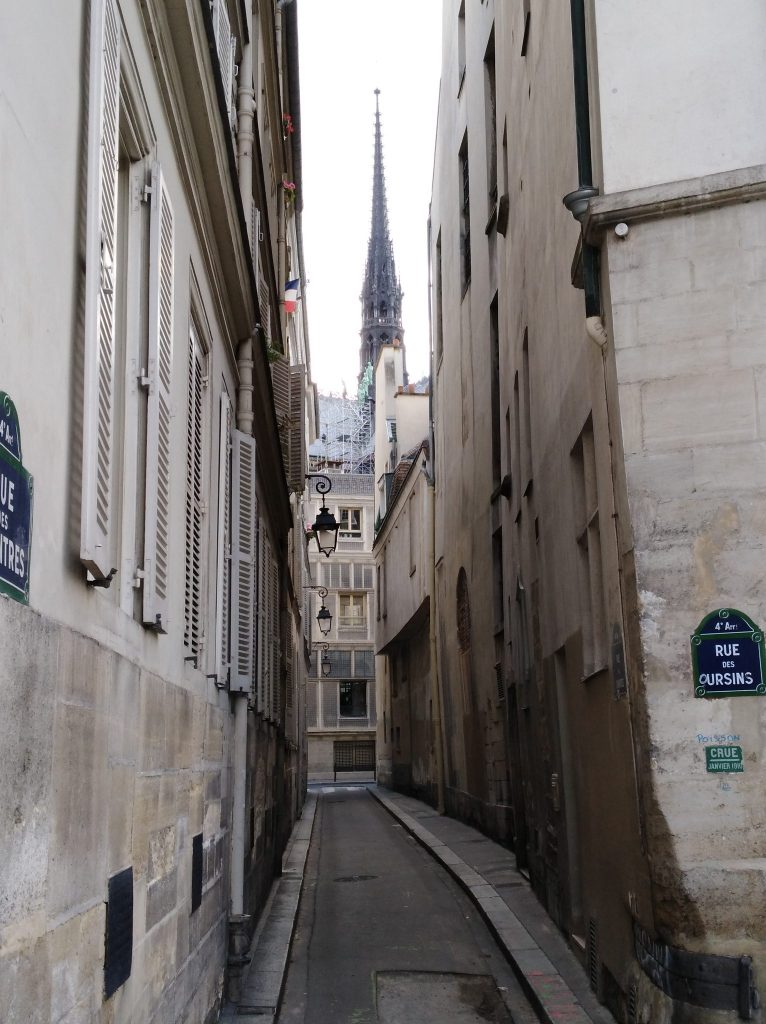 The spire of Notre Dame de Paris, right before the 2019 fire. Photo: © GEC

Thanks to the work of several generations, the Splendor of the Holy Chapel has succeeded in sailing through time to the present day. It is a world heritage that can be appreciated by everyone, from all walks of life. With its changing luminescence depending on the time of day, the season and the weather, visitors can return several times to find something new. May it enchant many future generations with its multiple facets. 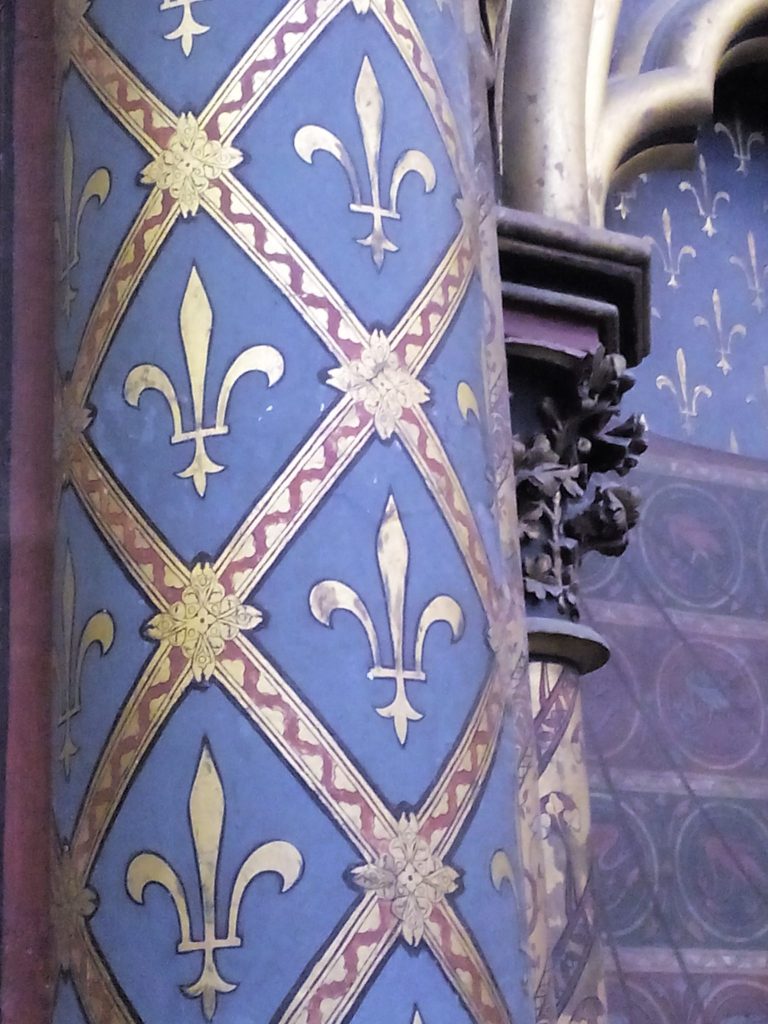 The interior of the Holy Chapel has been restored with archaeological meticulousness, in the most authentic way possible. Photo: © GEC