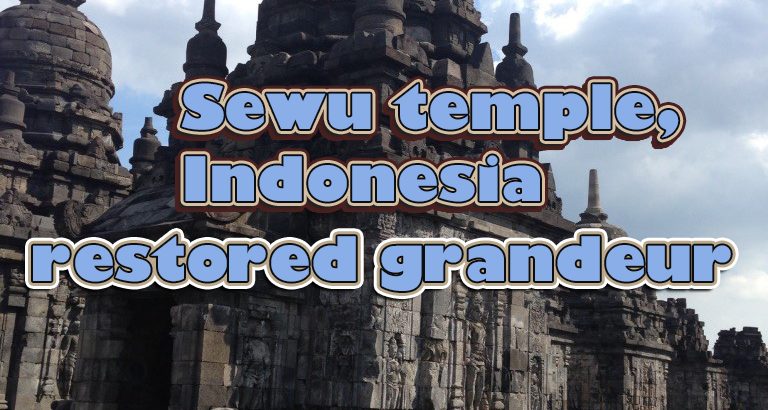 Known in Javanese as the “Land of a thousand temples”, Sewu temple is a great marvel of buddhist architecture in Indonesia. For a very long period, it was praised as a wonder of perfection. For a long tme, the temple complex was shrouded in mystery. It’s origins were associated to a story relating it to a supernatural origin. Thanks to the permission granted by Pakubuono II, the sushunan of Mataram, in Java, for an expedition to uncover more about them, Sewu’s splendor was eventually unraveled and restored.

Upon my arrival in Jakarta, I met with Kresna Satria, a States of Splendor Indonesian correspondent, who kindly invited me for a very nice Indonesian meal, downtown. Such a welcome was a great way to initiate my travels in the world’s greatest island country. Kresna gave me a few tips, on this occasion, for my travels in his country. As per our conversations, I decided to concentrate this voyage on the legendary island of Java. Having heard of the many splendors of the place, it definitely was where I wanted to go on this trip. Java is the site of many world renowned temples, but the one where I went to for the sake of this article was candi Sewu, or Sewu temple, as the word for temple, in Indonesian, is candi. 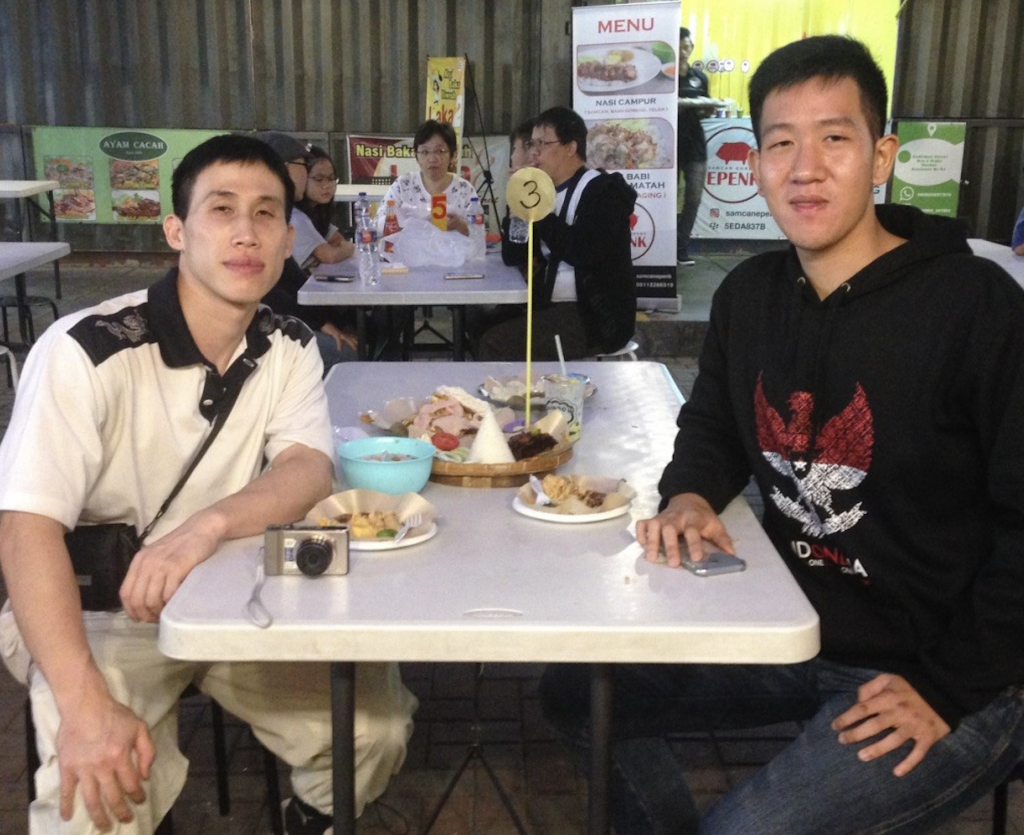 Finally having arrived in Central Java province, I decided to go to Sewu temple, one associated with the legend of Joro Longgrang. For a very long time in history, candi Sewu’s origins were held to be supernatural, by many local inhabitants. The regular use of the temple complex fell out during the Middle Ages, nevertheless, they were always kept in place.

The goal of the present article is not to tell the story related to the legendary creation of the Sewu temple complex, in detail. Storytelling is the subject of the upcoming SOS podcast #11, as many will appreciate. However, for the purpose of explaining the historical perception of this candi, and the. surrounding ones, I will summarize it.

Boko, a kingdom headed by a cannibal giant named Prabu Boko, aided by his assistant, another giant named Patih Gupolo, invaded it’s prosperous neighboring kingdom, called Pengging. The just king of Pengging, sent the prince Bandung Bandawasa to defeat the invading giant, which he ultimately killed. The prince then fell in love with the giant king’s daughter, Rara Jonggrang, who refused the prince’s marriage proposal.

When prince Bandung Bandawasa insisted on marrying her, Rara Jonggrang accepted on two impossible conditions, one being the construction of a great well and bathing place, the other, constructing 1000 temples in one night. The prince had superpowers, and so, with the aid of demons, he was able to construct a jalatunda well. Princess Rara Jonggrang asked her deceased father’s assistant, the giant Patih Gupolo, to help her bury the prince alive when he finished constructing the well. The princess tricked the king into entering the well he constructed, and Patih Gupolo covered him with immense stones, but the prince finally was able to free himself. 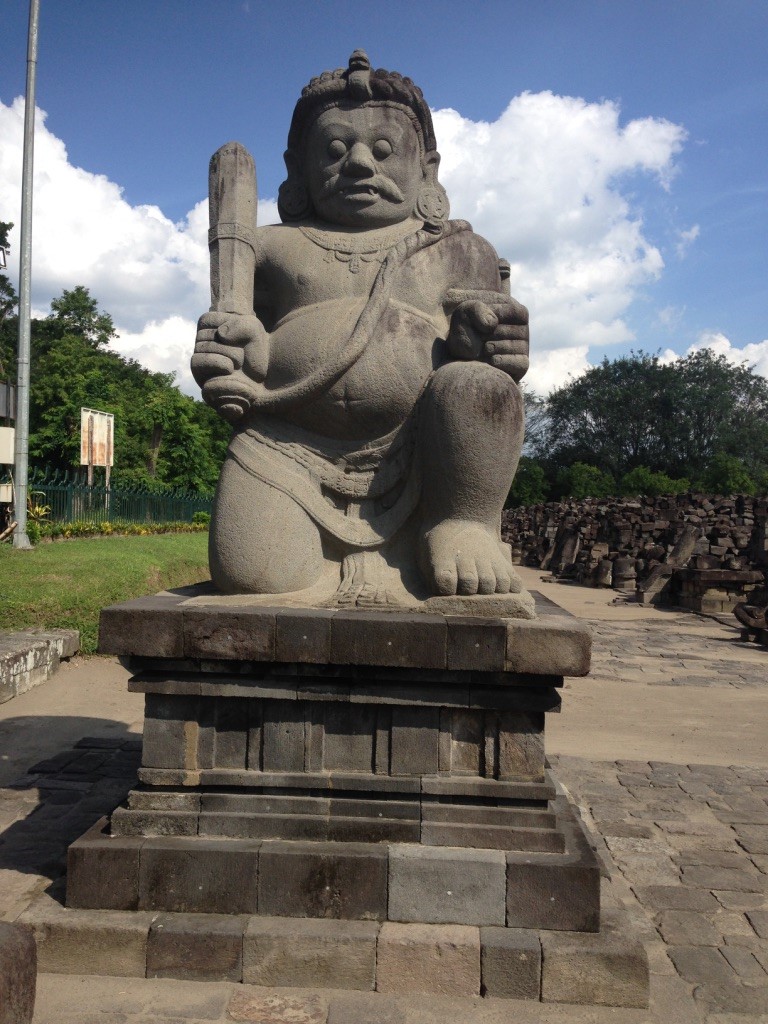 The prince now had to fulfill the second condition, which he again did by summoning spirits. He constructed 999 temples during the night. However, right before finishing the last temple, the princess Rara Jonggrang, made the roosters crow by lighting fires in the direction of the sunrise and beginning morning work, thus scaring the demons into thinking the sun was rising, making them flee. The prince was infuriated by this and turned Rara Jonggrang into a stone statue, completing the final temple and fulfilling the conditions of mariage but paradoxically separating them forever.

There aren’t 1000 temples in candi Sewu. There are 257 buildings, with a total of 249 temples in the complex. The location nonetheless has always been related to this story. Therefore, local inhabitants would never displace any of it, thinking about the demonic activity that perhaps was behind. it, not wanting to disturb spirits.

Sewu temple largely fell out of use, and gradually had parts of it fall apart. It is actually older than the more famous Borobdur and Prambanan temples. Various volcanic eruptions of the nearby Mount Merapi covered much of it in volcanic ashes generations. The local inhabitants of the Prambanan plain, were still all aware of it’s existence and location, since it was the largest buddhist temple in the region. Candi Sewu is actually a witness to the largely peaceful coexistence that the simultaneous presence of Hinduism and Buddhism had for many centuries. 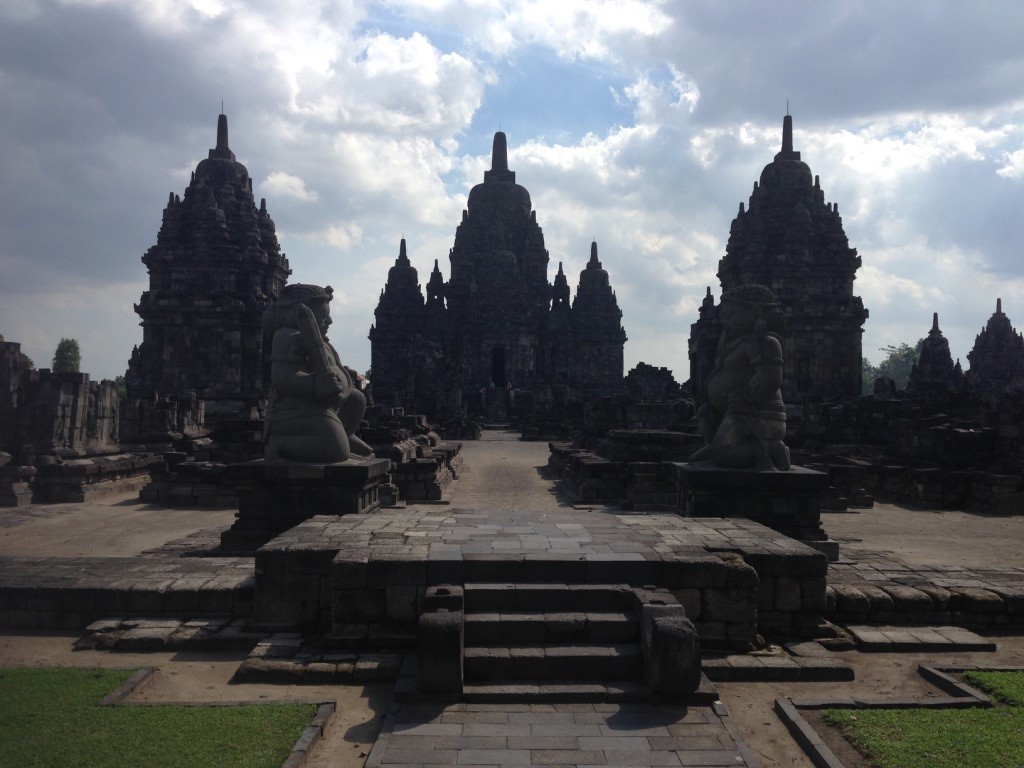 Sewu temple used to. be called Manjusrigrha, after a bodhisattva from the Mahayana current. It was constructed in the 8th century by two successive kings, being finished while King Indra was reigning. There is probable evidence that it was enlarged during the reign of a Hindu king, Rakai Pikatan, most probably encouraged by the fact that he married a buddhist princess.

Pakubuwono II was the name of the Muslim king who reigned in 1733. Thanks to him, permission was granted to a Dutchman, Cornelius Antoine Lons, to visit the location of candi Sewu. The traveling merchant discovered the ruins of Sewu temple and was amazed by it. He wrote the first western description of this place as it was at the time.

Sadly, during the following years, much vandalism and theft occurred on this historical site. Various sculptures were taken away to the Netherlands and many of them still are found today in foreign museums. However, candi Sewu today, is truly beautifully restored. From a bird’s eye view, one can clearly discern the original mandala disposition in which the temple complex was constructed. 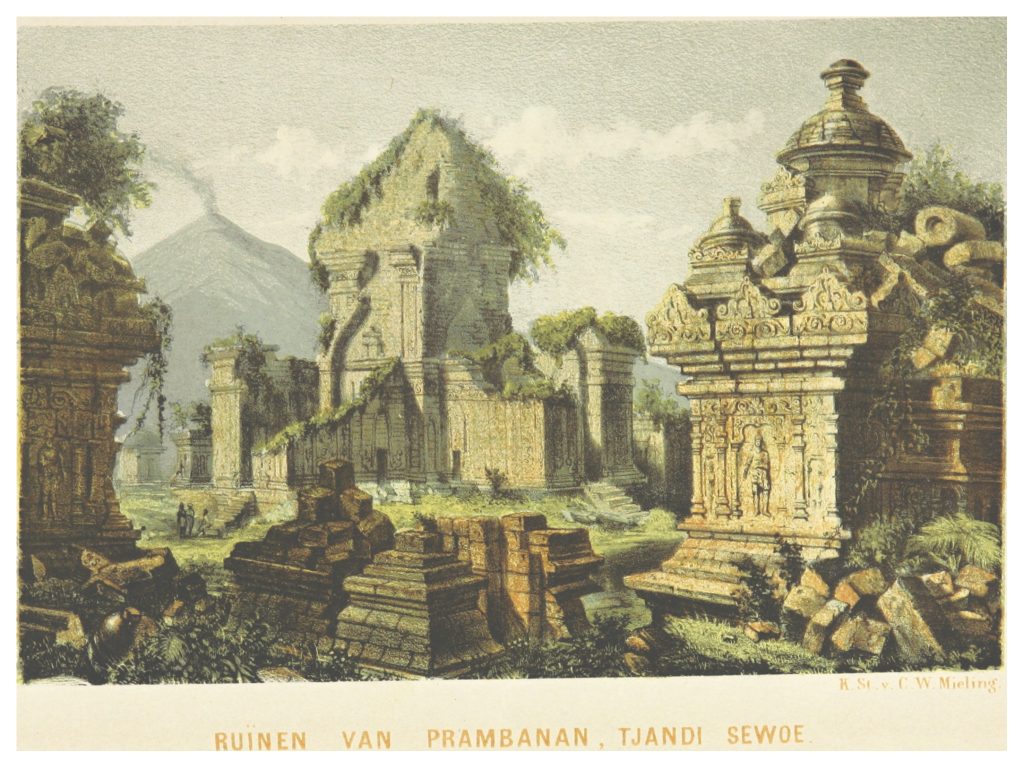 Part of the candi Sewu, as it appeared around 1859.

In 2006, there was a major earthquake that cracked many temples of this complex. The main temple was closed as a result. Following this, there was a repairing of the affected buildings. The reparations were done in such a way as to preserve the authenticity of the constructions, using stone from a source similar to the original one. Today, the main temple has reopened to te public.

Once on the site, we can observe the many sculptures on the buildings. Most of these have not been retouched, and are in the original state in which they were found, thus further preserving the authentic aesthetic of the site. Many bodhisattvas are depicted along the walls of the multi faceted temples. 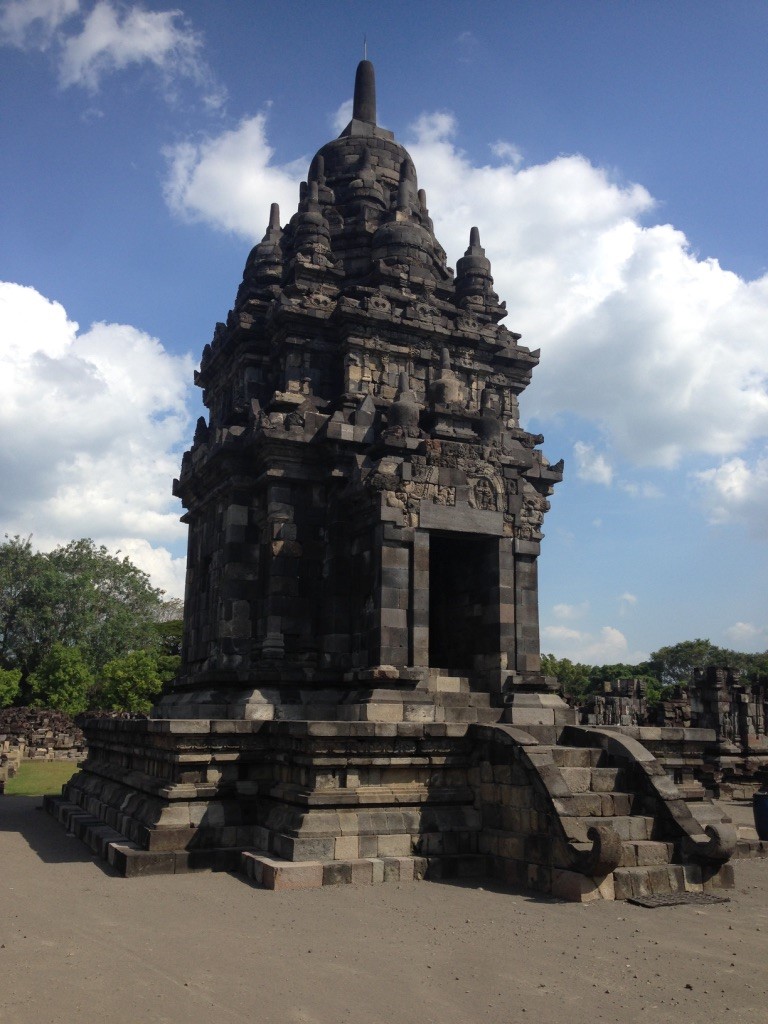 Walking in the middle of the Sewu temple mandala, one can see what the life in the temple may have been at a time. It is an experience which stimulates the imagination very much. It is astonishing to think of the hundreds. of workers that must have sweated to put this wonderful site together over the years. One piece of advice the public should remember upon visiting Sewu temple, is to definitely bring a hat.

The complex spans 185 meters from north to south ans 165 meters from east to west. Walking in the temple thus is quite a lasting experience. There are many different alleys ont can choose to walk in to feel the passing of time on these pieces of stone art, having roasted in the sun over the centuries. 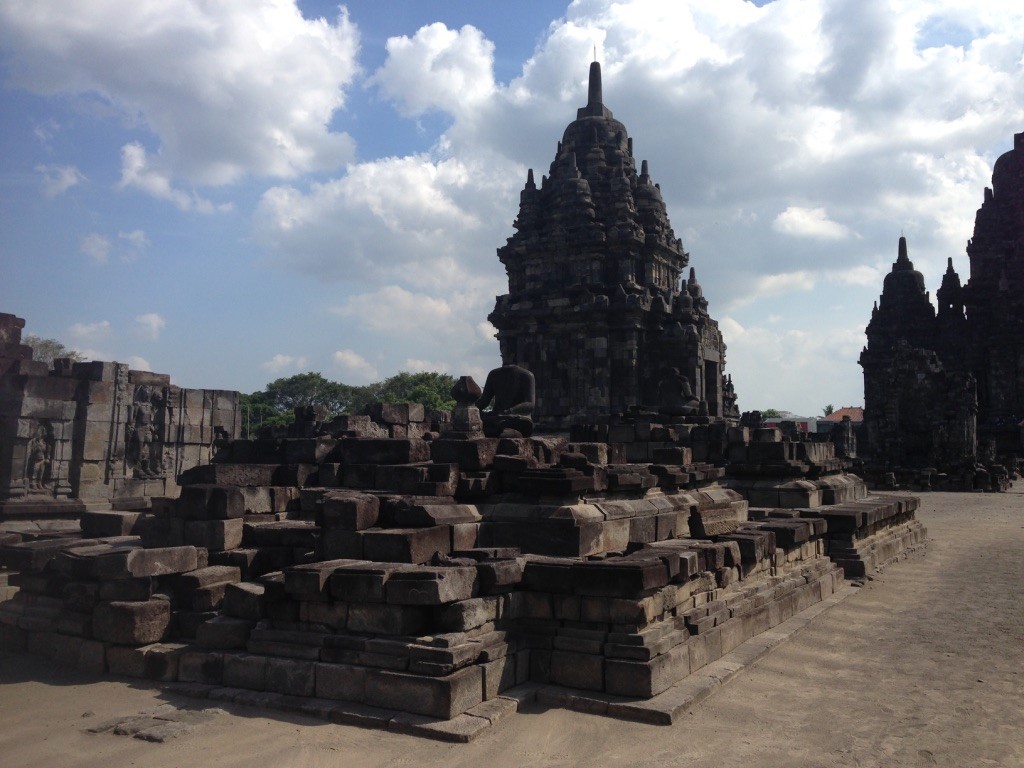 The central temple is the main attraction of Sewu. It is 30 meters high and 29 meters across. It has 20 different sides, all very ornate with sculptures. There are stone tablet inscriptions that were found dating back to the late 8th century. One of them, discovered in 1960, the Manjusrigrha inscription, praises the absolute beauty of the central temple.

In the central temple of the Sewu complex, there exists a lotus flower shaped pedestal. Many archeologists think that it used to be the site of a large bronze buddha statue. It most probably was pillaged, in an unknown period. 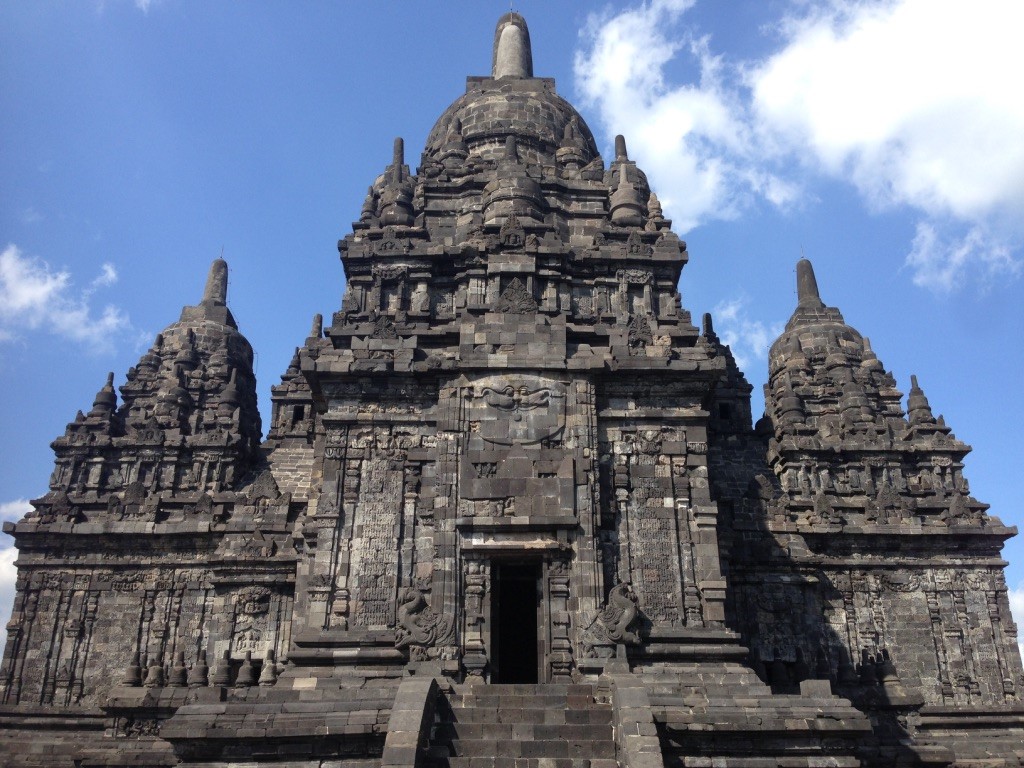 As Indonesia’s second largest buddhist temple, the Sewu complex is a great sight to behold. One can understand that it’s presence is inextricably linked with legend. All visitors are invited to walk along it’s pathways, that are in the form of a buddhist mandala, symbolizing. the universe, with the great temple in it’s center as the mythological Mount Meru, the center of the universe. 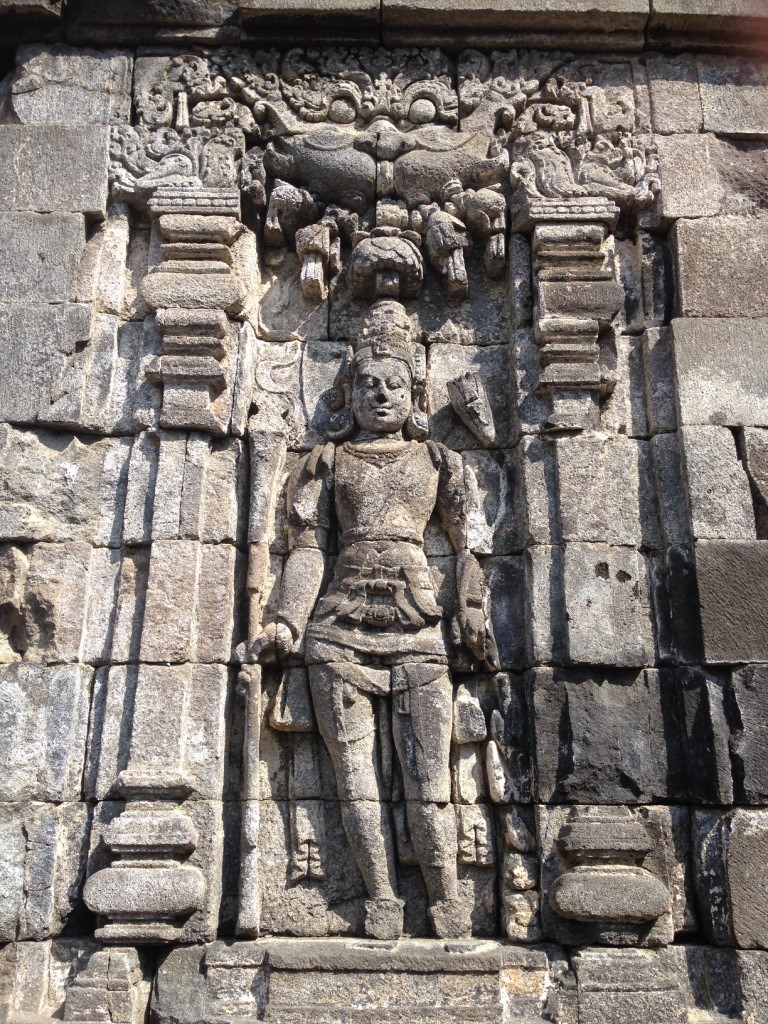 A stone bodhisattva, on one of the perwara secondary temples. Photo: © Lai Kuen Tang, GEC