Ahmed owns the best Biryani restaurant in Karachi, Pakistan. Its 2000 square feet of gleaming stainless steel, filled with stoves, slicers, mixers, grills, smokers, and fryers, manned day and night by a wealth of local Biryani talent. Ahmeds’ biryani restaurant has made it to the tourist guide books, declaring a nugget of truth. The biryani test, it says, is about throwing a fistful of rice on the floor and checking if each grain falls separately. If two grains stick together, God forbid, then the biryani isn’t good.

Pakistan provides so much on its cuisine menu but Pakistanis overwhelmingly love to indulge in one dish is the mouth-watering biryani. With local and hyperlocal variants developing into distinctive biryani types, one is spoiled for choices in experiencing this melting pot of flavors. Several say the biryani is a Mughal creation, a poor man’s dish concocted by royal kitchen chefs, where the elegant Arab and Persian pilafs were tainted with spices and various kitchen scraps. Some contradict by claiming the dish had been in existence even earlier. That would be the only simple reality of the most famous dish from Karachi, Pakistan. The biryani’s background and type is a subject of passionate debate. Biryani’s whole origin is filled with tension. Although some anthropologists trace the roots to the Persian beiryan (meaning “to fry”), others say it is more likely to be true to identify the derivation to the birinj (“rice”). One probable forefather of biryani is the sandwich, evidently still found in Esfahan’s bazaars), in which two parts of flatbread, not rice, layer meat.

I was persuaded of the supremacy of the pulao when I grew up in a family that was proud of its yakhni pulao. From the stock in which it was prepared, each grain of rice got its flavor, the mutton was rendered to perfection, fried separately in yogurt (thus debunking the pulao’s one-pot-meal theory). The biryani cooked up from a tastier qorma (about 90 percent done) and rice (80 percent done); both then baked and steam-cooked until fully done, cooked at home was more robust but less magical. Amazingly, a third recipe appeared to follow the bazaar biryanis, one that combined the essence of yakhni pulao (rice cooked in stockwith subtler spices) and layered biryani (final steaming of cooked rice and meat layers together). 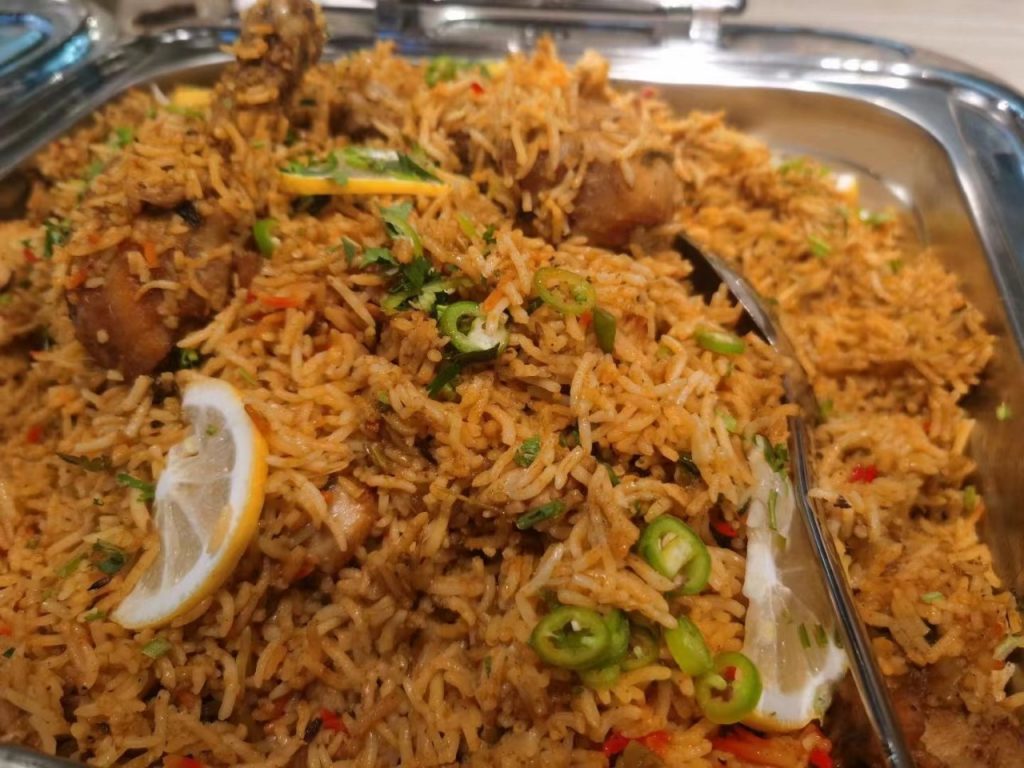 The mighty and world renowned biryani, now found all around the world. Photo: Ataullah Kiani

Ingredients vary by rice and form of meat that is used. The primary ingredients are rice and meat (either chicken,beef, goat, lamb, fish or prawn). As meat is popular in the subcontinent’s dishes, vegetables are also used to make biryani, known as Vegetable biriyani. Maize can be used depending on the season and availability. Ghee (clarified butter),  pepper, nutmeg, mace cloves, cardamom, cinnamon, bay leaves, mint leaves, coriander, ginger, tomatoes, green chilies, onions and garlic may be used in spices and condiments used in biryani. The luxury versions are made with saffron. The chicken or goat meat is the main ingredient in all biryanis that accompanies the spices; instead, different varieties might use beef or seafood. The dish can be eaten with raita or dahi (curd) chutney, curry, korma, a sour aubergine (brinjal), boiled egg, and salad. 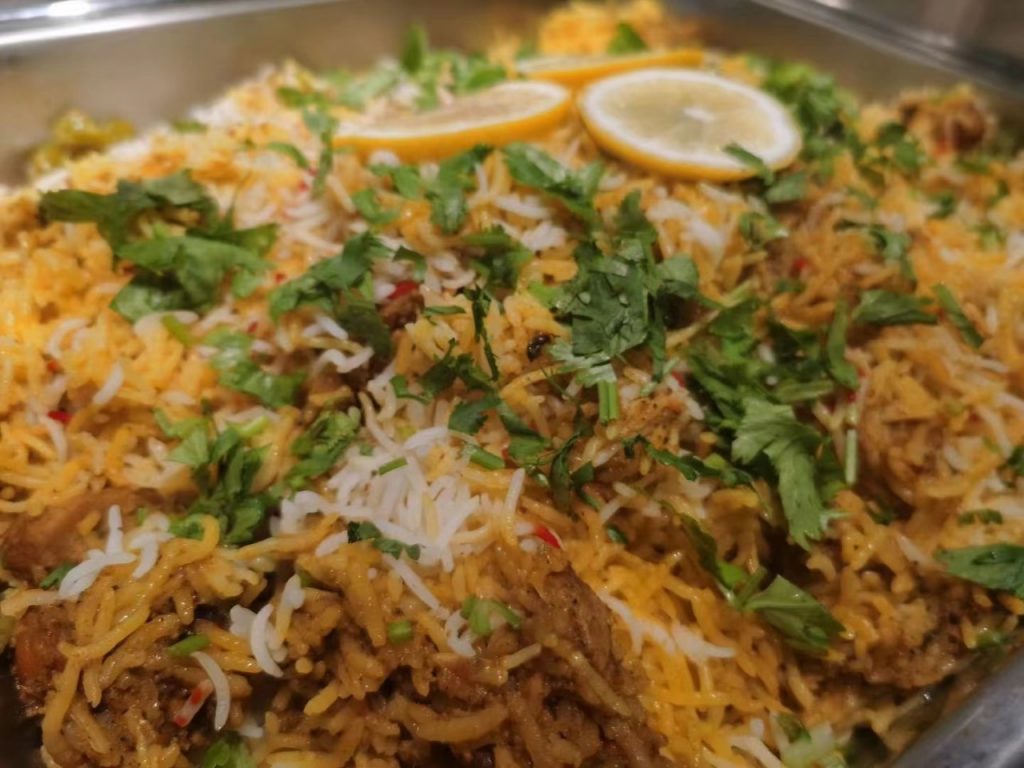 Biryani has spread to different countries, adapting itself to the various ingredients  and traditions of each location. It’s local variations can be found in Sri Lanka, India, Myanmar, Indonesia and even Thailand. In Thalassery, Kerala, India, the Thalassery biryani is an example of how the Islamic influence on local cuisine. This biryani uses Khaima/Jeerakasala rice, a shorter grain variety of rice, instead of the traditional basmati rice. Thalassery biryani is a dish originating from the Mappila Muslims, arguably the oldest settled native Muslim community in South Asia. It is usually made using chicken. 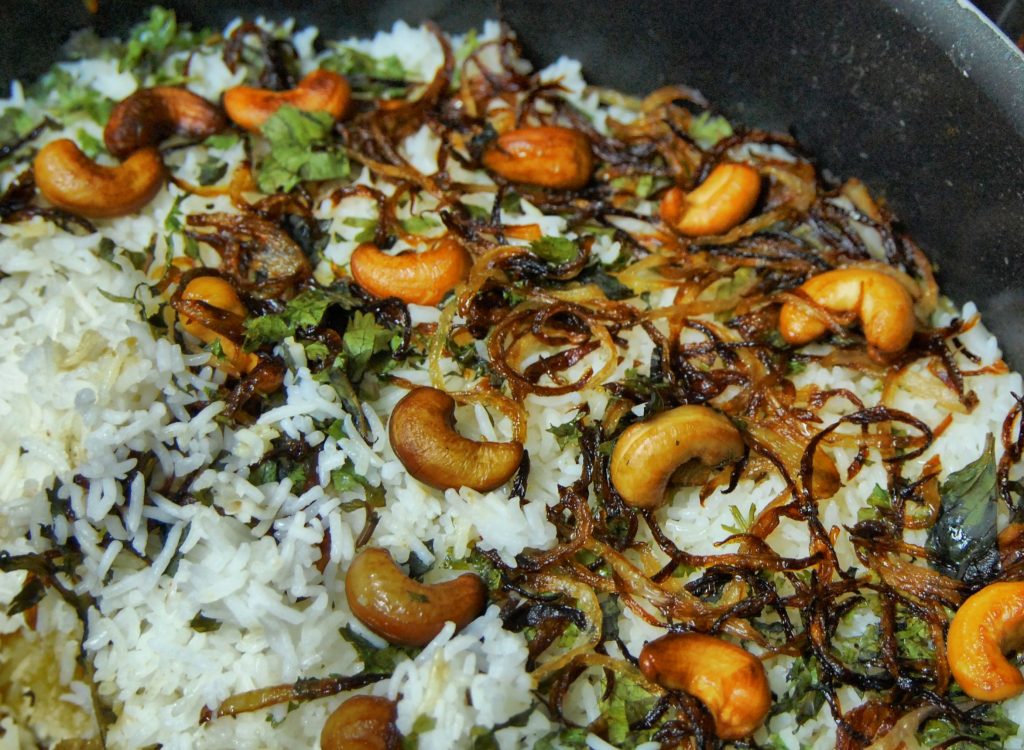 One of the most widely consumed biryani is the Sindhi biryani, originating from the Sindh province, in Pakistan. It is alternately cooked using mutton,  chicken, shrimp or even fish. It is thee one often featured in British pakistani restaurants. In fact, Sindhi biryani is served on almost every Pakistan International Airlines flights. 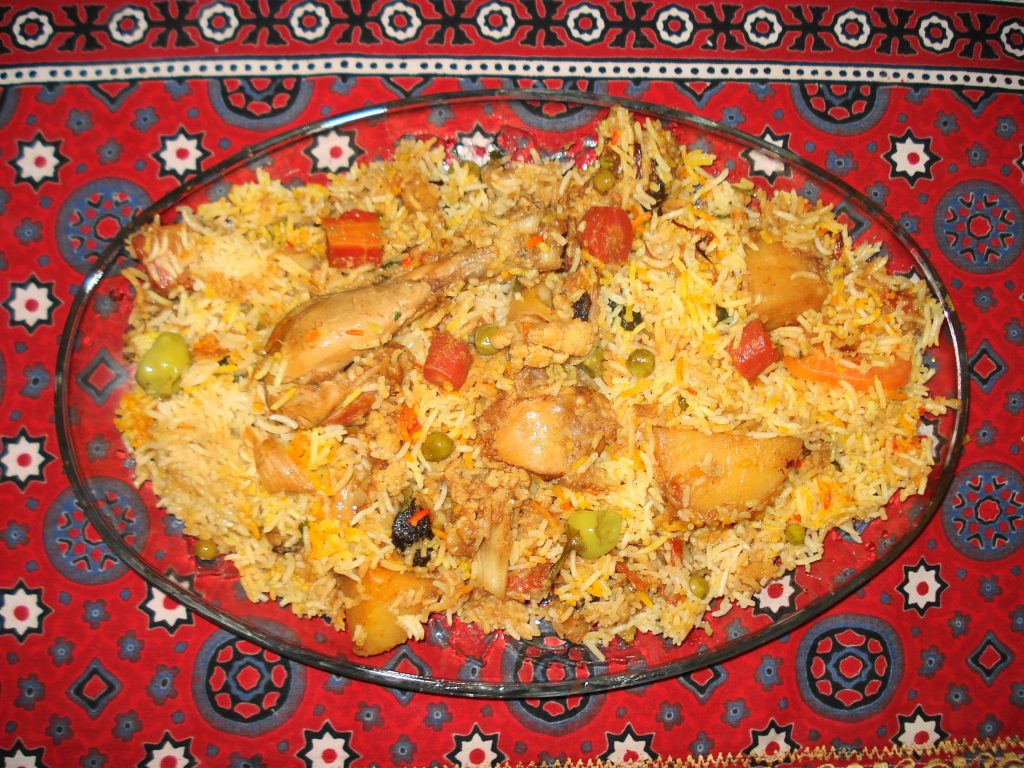 Some traditionalists argue that only a kachcha biryani (in which raw meat is cooked with the rice) counts as the real thing. A pukka biryani (in which the meat and rice are cooked separately and then assembled before being finished with steam for a few minutes) is a pulao. The raw marinated meat for kacchi biryani is mixed with raw rice before being served together. It is also known as Yeqnikacchi. Usually, it is cooked with chicken or goat meat, and sometimes with fish or prawns. The dish is cooked layered at the bottom of the cooking pot, with meat and a curd-based marinade. Above it is placed a layer of rice (usually basmati rice). Often, potatoes are added before adding the layer of rice. The pot is normally sealed to allow it to cook in its own steam (typically with wheat dough), and it is not open until it becomes ready to be served. Another slow method to cook biryani is DUM. A slow-cooking method in which the cook layers parboiled rice and raw, marinated meat in a heavy-bottomed vessel, sealing it with dough and cooking it for hours over a low flame.

Biryani is my favorite party dinner dish. A one-pot meal of rice, meat, and fragrant spices, it is rich in flavor, great in tradition, and sufficiently shed some light to take center stage in vacations and ceremonies like Eid or marriages. Every bite is suffused with cinnamon, dried fruit, roasted nuts and caramelized onions along with deep and flavor-layered. One should taste this great dish,especially when visiting Karachi, Pakistan. Eaten with loveby the rich as well as poor, biryani is indeed a marvel of Pakistan’s culinary heritage.