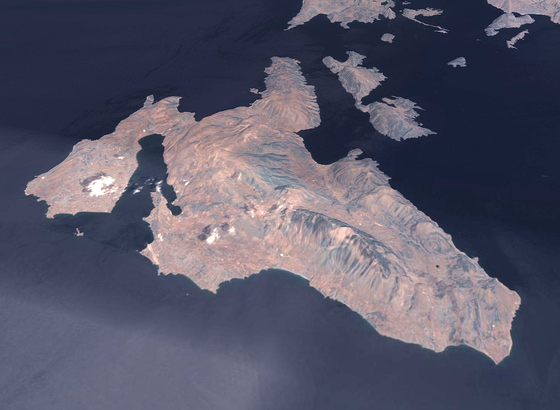 Melissani caves: secret of the nymphs

There lies a topographical miracle, in the paradise known as Greece. Hidden for centuries deep within the Greek islands, it is a true wonder , quite comparable to fiction. Sailing to the Ionian sea, all the way to the island of Cefalonia, there lies a superbly beautiful territory, bathing in sun and history. This island has always been noted for it’s beauty, and many legends surround it. It is somewhat of a quaint paradise in of itself.

This paradise island is actually the largest of the Ionian Islands. It is the home of some quite famous wine made since many centuries ago with Robola. The olive oil produced there is also another major aspect: one million olive trees exist on that precious dot in the sea. However, there is one treasure on Cefalonia that was only recently rediscovered by accident.

There have been legends for centuries, concerning this once hidden treasure. This treasure is a geographical feature that got it’s name from one of these stories. A long time ago, there was a sheep herder named Melissanthi who, searching for one of her lost sheep, fell into an underground lake. A myth also holds that one of the nymphs, named Melissani, threw herself into that same underground lake when Pan refused to give her his love. This is why today, we call this place lake Melissa and the Melissa caves.

For quite a long time, this karst rock cave system remained hidden under a dome of vegetation, rock and debris until the 1953 earthquake revealed it once more. The discovery unveiled an absolute wonder: a cenote, a kind of deep opening in the earth attaining an underground lake, colored by the stones at the bottom and the rich varying reflections of the karts walls. A whole system of caves covering and housing a mysterious lake rests inside this magical location. The lake is made of seawater backing up inside the island as well as freshwater flowing from the interior of the insular lands. Once the first speleologists explored it, they found countless artifacts dating to the 4th century BC. Some of these objects were effigies of the nymphs, long since forgotten.

So lake Melissani finally saw the sky, and ever since, people have been flocking to see this spectacle. Rays of sun descend into this well of sorts, surrounded by trees and plants, reflected on rock in tones of white, beige, light pink, and plunging into the turquoise waters, creating a surreal phenomenon akin to an aura of deep blue, magenta, violet and orange. To be there is to be witness to a natural site bordering on the dreamlike sight.

Being just one meter above sea level, one can apparently feel a connection to the surrounding seas, even though 500 meters away. A system of tunnels leading to other large cave openings can be followed. The atmosphere inside this celestial underground, even though almost always crowded with paddle-boats, remains one that is awe inspiring. For someone searching for a sublime place to discover, this is, without the shadow of a doubt, one of the most phantasmagorical places on our earth.