Ajrak: The recognition of Sindhi Culture in Pakistan

Pakistan is a country with variety of cultures as this great country has four provinces and one autonomous region called Azad Jammu and Kashmir. Today’s story is about Ajrak in Sindhi culture. Ajrak is derived from an Arabic word ‘Azrak’ which means ‘blue’. It is a cloth of 3 to 4 meters length. This cloth is decorated with geometric patterns with rich crimson and deep indigo color and black and white colors are also used to give a definition. This piece of cloth is commonly used in Sindh and men used it as a turban and they curled it around the shoulders and women use it as a shawl. Sindhis (people live in Sindh) have special association for the Ajrak and they use it from cradle to grave. They wear it in different occasions like marriages, different parties and birth or death.

Ajrak has motley colors. For outlines black and white colors are used but chiefly variants are of blue and red colors. And for blocks print pattern is used. It is more importantly wealth of a civilization that values that tradition over the years. Indus Valley civilization started from 2500BC-1500BC. So even before Ajrak became the symbol of identity for Sindhis it celebrated the existence of one of the earliest civilizations. And it is even earlier than Moen Jo Daro in Sindh.

An artist and textile designer named as Noorjehan Bilgrami has conducted research in the field and played an important role over the past 26 years for the revival of crafts in Sindh. A book named ‘Ajrak: Cloth from the soil of Sindh’ published by the Textile Society of America Symposium Proceedings has mentioned that “The trefoil is thought to be composed of three sun discs fused together to represent the inseparable unity of the Gods of Sun, Water and Earth.” The printing and dyeing in that fabric was adopted from the ancient civilization after the workshop was discovered from Moen Jo Daro in Sindh. In addition the most notable dye, Indigo Ferra Tinetoria, grew along the banks of the River Indus.

The Bombay Presidency developed the art of printing and dyeing under the British rule. Muslims and Hindus both have jointly cooperated towards its growth with Ajrakhpur which is a village in Kutch, India to keep the art alive trying as hard as the village in Sindh, Pakistan. It is believed that Ajrak was adopted in 711 AD after the conquest of Sindh by Muhammad Bin Qasim. It undergoes a specific printing that’s why called as Ajrak as the craftmens claimed that. It is considered to be a pride word in Sindh as people wrap it around their necks, wrap it into a turban, drape it over their shoulders and also present as a gift to others as a tradition. 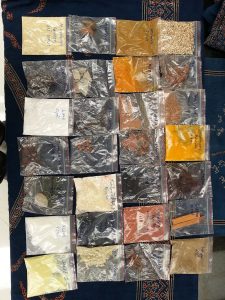 The natural herbs used as a raw material while making Ajrak symbolize love for nature. These include katha, alum, dried lemon, clay, indigo dye, pomegranate peel, soda ash, mustard oil, alizarine (red color dye) and kesu phool. Manufacturing process also use renewable resources like water, sunlight, mud and sustainable agriculture. The designs are not anicomic of humans and animals. Designs symbolize the bounties of natural things such as stars, floral prints, indigo for twilight and red for the earth.

As it is made from natural materials so it is nonallergic. The Ajrak is reliable and strong cloth. As the herbs are used in that cloth so it acts as an insulator, warm in winter and cool in summer. Ustad Allah Rahu who is the owner of one of the biggest centers of Ajrak in Sindh says “Having labourers at my workplace means I can produce more Ajrak as well as provide jobs to the local people’’. Transferring the knowledge down through generations, ustads (master-dyers) have trained karigers (workers) who appoint their own trainees. While men do a majority of the work, women help from home.

There are number of complex processes while preparing Ajrak cloth, printing and then dyeing. It is prepared in 30 to 40 days. It takes a month and a half to have the Ajrak ready for the market. Workers work on the multiple Ajrak sheets. First stage is to carve a design. That skill is passed on from father to son but now many organizations are training workers to keep the craft alive. The designs are patterns including flowers, stars and the design is made for the double printed cloth. When the block is ready to print it is given a code and the code is based on design. 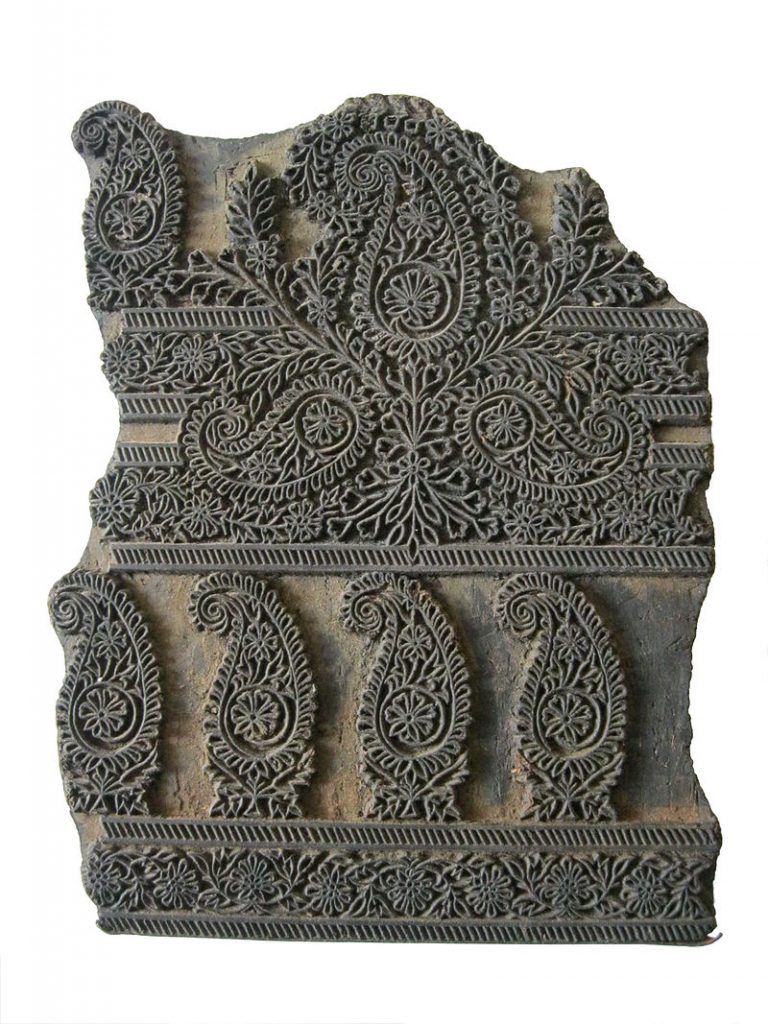 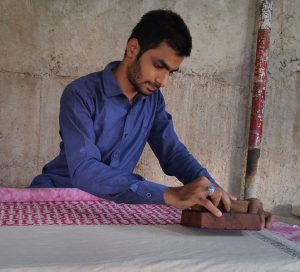 The next stage is to prepare cotton cloth for printing and dyeing. It uses the resist or mordant techniques, or both. In resist printing, the areas of the cloth remain white when dipped in dye while in mordant technique the cloth is printed with the wooden block dipped in substance which allow it to attach substance to the printed areas. Next step is to cut the cloth in 10 meters long sheets and then camel dung used as a bleaching agent. Then the cloth is left for 10 days to dry. The dried cloth is then brought to the shop for printing. The last stage is application of Kharrh which is again dyeing the cloth. It is a paste made from various herbs and pasted on the parts which are white and blue which later to be dyed red to protect them from indigo dye.

The next dying process is to dye the fabric with cold water and then the fabric is kept under the sun to dry before it is washed to get rid of the resistants pastes and dyes. The process is done by dipping Ajrak to indigo vat many times. The demand of Ajrak is endless in local and international markets and ranges from 1000 to 2000 Pak Rupees at smaller shop but can cost upto 5000 Pak Rupees in bigger shops and urban areas. It is an art to make Ajrak but many artists think that they are not valued. In the end, the Ajrak is not something of a trend but it’s a culture and it’s a vital part of Sindhi culture and because of this, it will always be in fashion.