The jewel of Charlevoix

The jewel of Charlevoix: The Hautes-Gorges-de-la-Rivière-Malbaie National Park
As avid nature lovers and hiking enthusiasts, my husband and I decided that it was high time we explore the high mountains of Quebec’s Charlevoix region. The Hautes-Gorges-de-la-Rivière-Malbaie National Park was our obvious destination. This majestic national park gets its name from the series of deep glaciated valleys cut into a range of high mountains. It lies within the Eastern forest-boreal transition region. The rock faces here are among the highest East of the Rockies. The park is the centerpiece of the UNESCO Charlevoix Biosphere reserve.

Through members of our walking group, we had recently heard about the Acropole des Draveurs hiking trail in the Hautes-Gorges-de-la-Rivière-Malbaie National Park. One man, who has trekked all over the world said, “I climbed the Acropole four times. You have to go!” Everyone’s account concurred. This was a spectacular, demanding, not-to-be-missed trail. 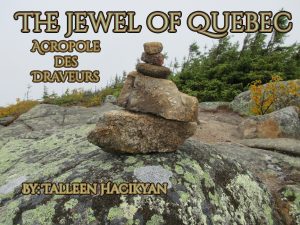 In the first week of September, armed with a tent and our Sépaq National Park passes, we drove through the scenic Charlevoix region to the village of Saint-Aimé-des-Lacs and followed the signs to the park. We camped in the park for three nights in the semi-serviced Le Pin-Blanc campsite, close to the Acropole des Draveurs trail. Le Pin-Blanc is next to the Malbaie River, with half of the campsites directly on the shore. What a joy it was to fall asleep to the lulling rush of water.
The park was created by Sépaq (Quebec’s narional park service) in 2000 and spans 224.7 km². Besides hiking and camping, activities include canoeing, kayaking, rabasca, riverboat cruises, fishing, cycling, birding and ice climbing. 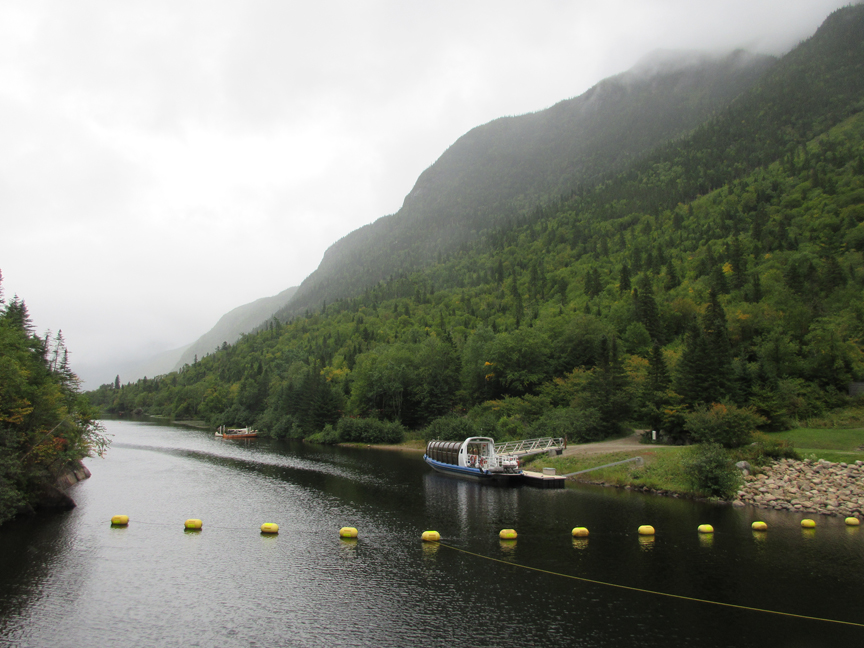 On our second day, a park attendant suggested a 15 kilometre loop that included parts of two trails: Les Rapides and Le Riverain, both rated intermediate. From Le Pin-Blanc campground we stepped directly onto the Les Rapides trail, that runs alongside the Rivière Malbaie and its rapids. At the Pont des érables bridge we we looped around and connected to the Le Riverain and backtracked the Malbaie River on the opposite shore. The last section of the path involves some easy climbing that provides magnificent views of the river valley. The forest of sugar maples and American elms has remained largely undisturbed for hundreds of years. A shifting mist added a touch of mystery to the landscape, reminding me of Chinese watercolors. 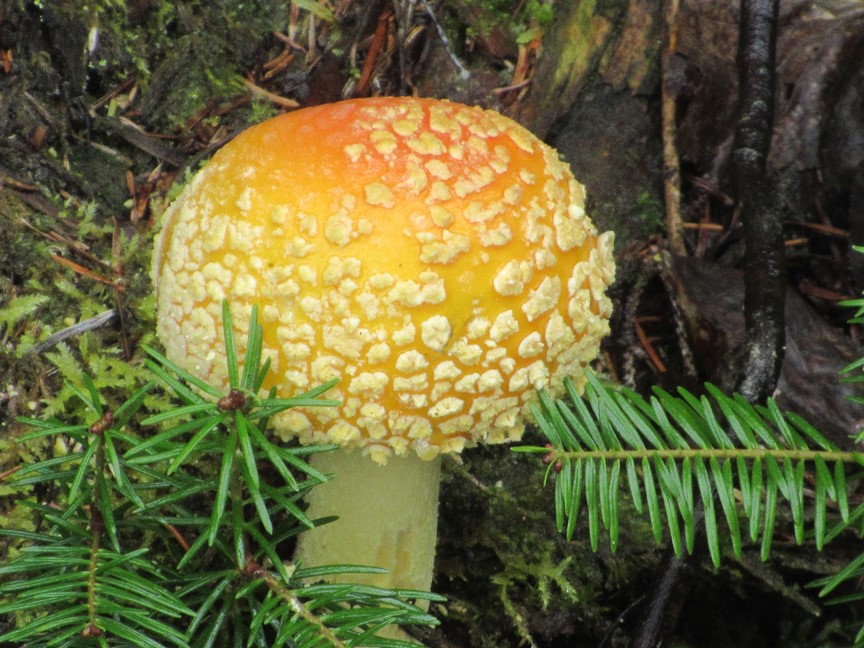 Day three took us up the legendary Acropole des Draveurs. Its name was coined by Félix-Antoine Savard, a priest and writer who lived in Charlevoix in the 1930s. The mountaintop reminded him of the Parthenon and he imagined faces of log drivers (draveurs in French) carved into the rock. Up to 1985 the Malbaie River was used to transport logs downstream. 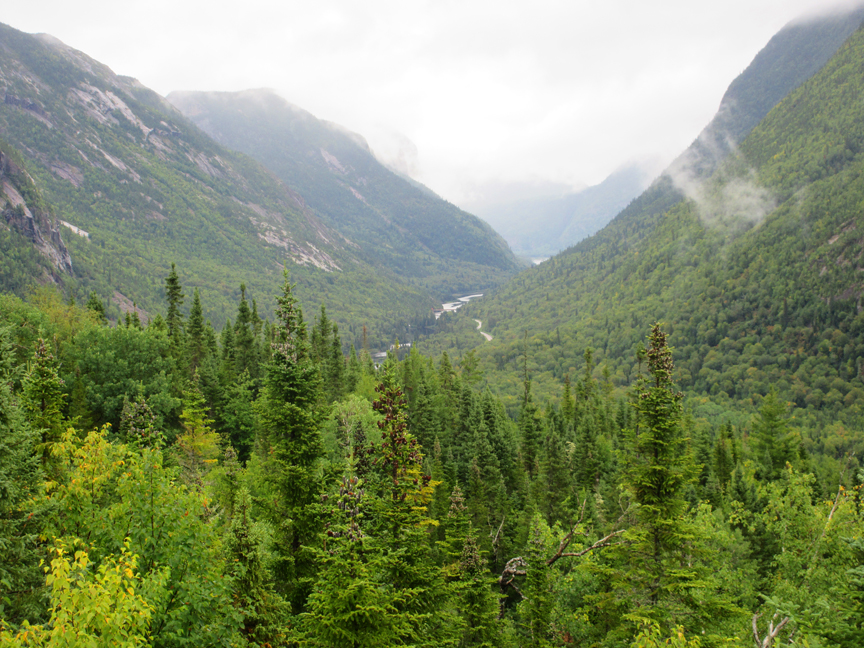 We walked from our tent to the trailhead of Acropole des Draveurs. A sign there recommends that hikers climb with two litres of water and trekking poles. The Acropole des Draveurs reaches 1048 metres. It is the highest point in the park. Temperatures fluctuate rapidly in this high altitude ecosystem. Because of this, the sign advises to bring warm clothes for the summit, even in summer. I recommend also taking rain gear, even if it is a hot day with clear skies when you start out. On the summit I was glad to wear my down jacket, woolen hat and gloves, even though I hiked up in a T-shirt. I was also very grateful to have my rain poncho for the downpour that started abruptly, just in time for our descent. Speaking of descents, one of the park rules is that hikers must start coming down no later than 4:00 p.m., whether they are on the summit or still on their way up. The sun sets quickly behind the mountain. 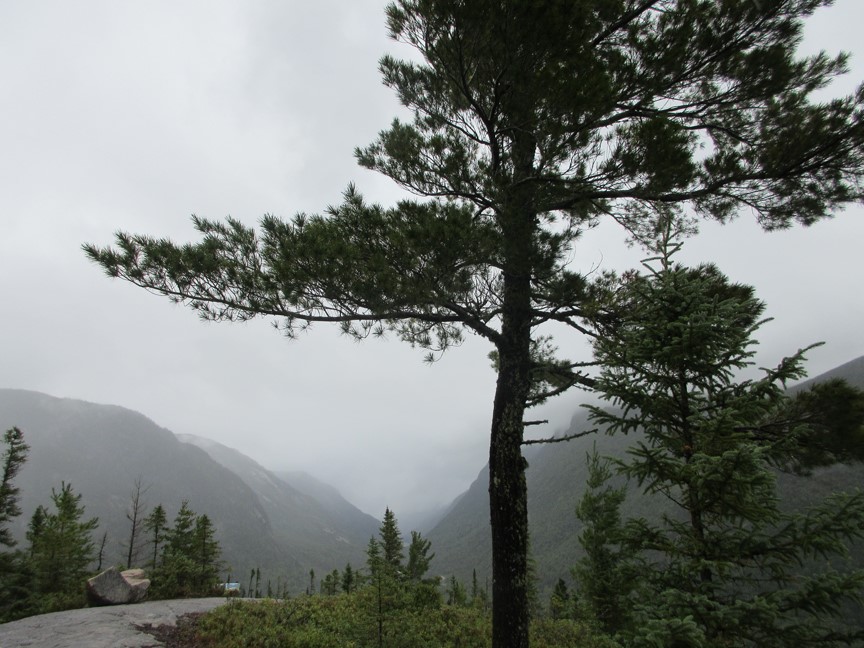 Majestic hike well worth the effort

We had heard that the first part of the trail involves some strenuous climbing over rock stairs. I can validate that. Acropole des Draveurs is considered to be one of the hardest hikes in Quebec. This is largely due to the rapid increase in elevation over such a short distance. Hikers climb 800 metres within the first 2 kilometres of the trail. The sustained effort is rewarded with one of the most grandiose spectacles in Quebec. On the way up there are some impressive lookout points. As we climbed, it was interesting to note the shift in vegetation. Leafy trees give way to conifers that fill the air with their distinctive fresh resin scent. Closer to the top, we saw Krummholz, the German word for twisted wood. Here it refers to the stunted Black Spruce and Balsam Fir. 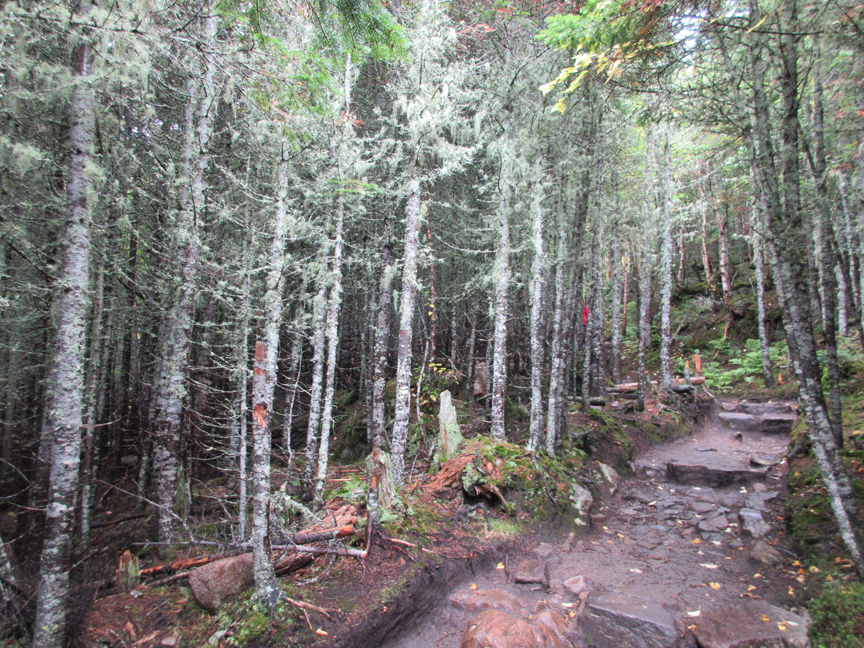 The park guidebook says that the 11.2 kilometre round trip hike can take anywhere from 4 to 6 hours. We spent 8 hours on the trail, taking countless photo breaks and enjoying an hour on the summit for lunch. 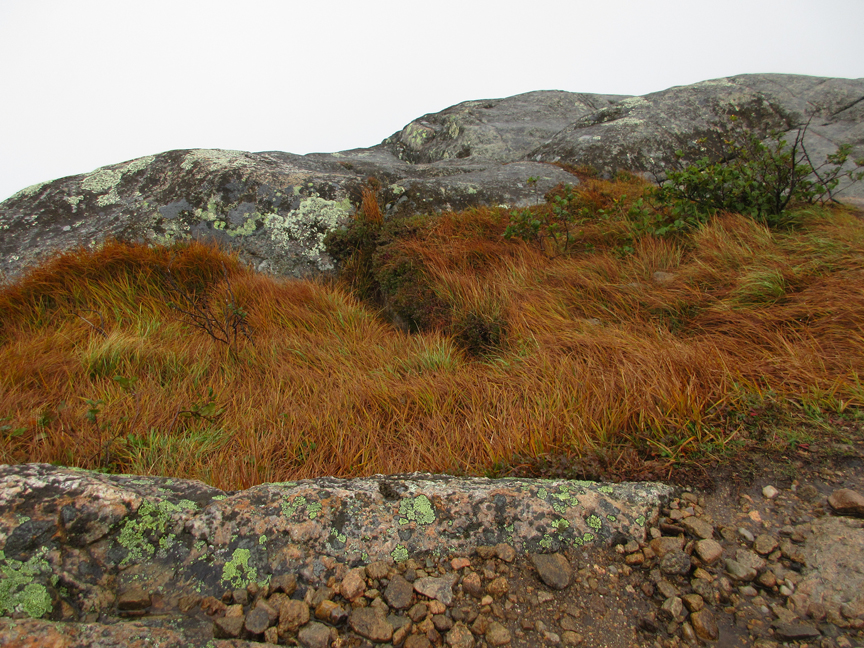 The Acropole des Draveurs has three summits. Between the first and second summit there are 330 metres. After walking another 450 metres, one reaches the final summit. Like the previous day, it was misty, especially on top. As soon as we got to the first summit we entered a surreal universe where curtains of fog created multiple variants of the Malbaie gorge. 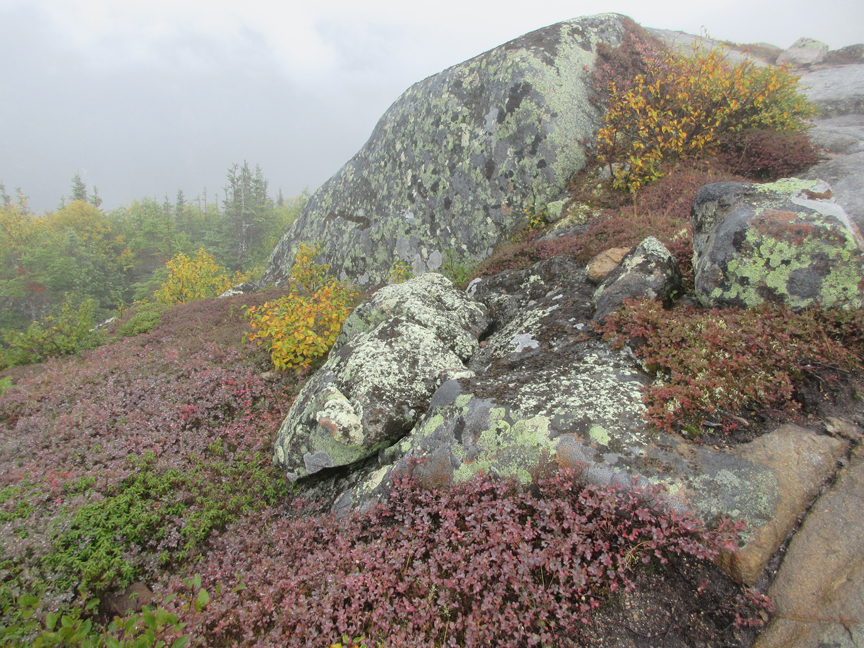 The walk to the second and third summits was pure enchantment. The high altitude Arctic Alpine ecosystem had an underwater look. In this extreme climactic zone, there are few trees, mainly low tundra vegetation. The word tundra comes from the Finnish word tunturi, meaning bare ground. Lichens and mosses paint the land with rust, ochre, violet and burgundy in between big weatherbeaten rocks. From the third summit we enjoyed a 360-degree panorama guaranteed to make you feel very grateful to be alive and part of this magical land called Quebec. 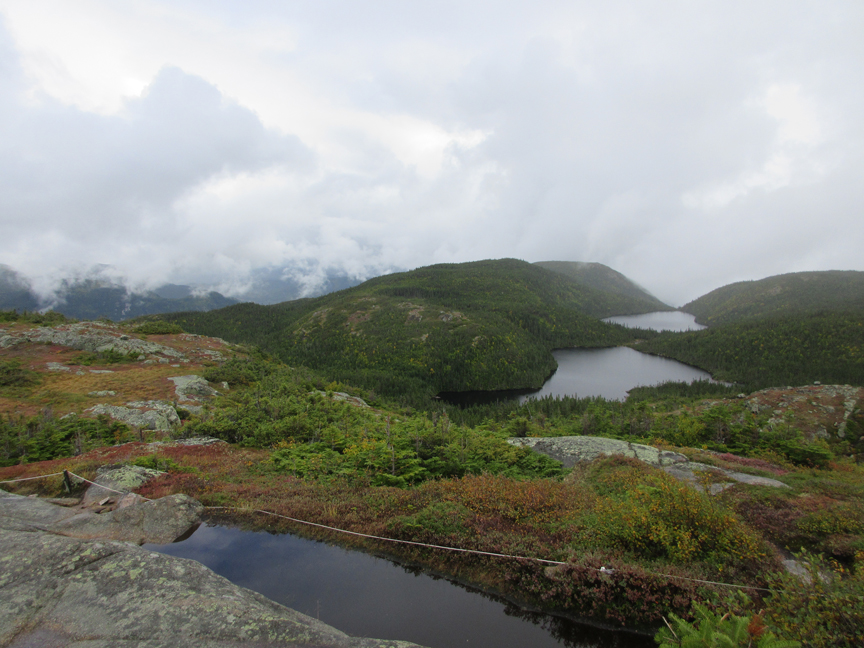 For those wishing more information about going to this location, or making a reservation in a camping ground adjacent to the Acropole des draveurs, go to the Charlevoix region touristic website. 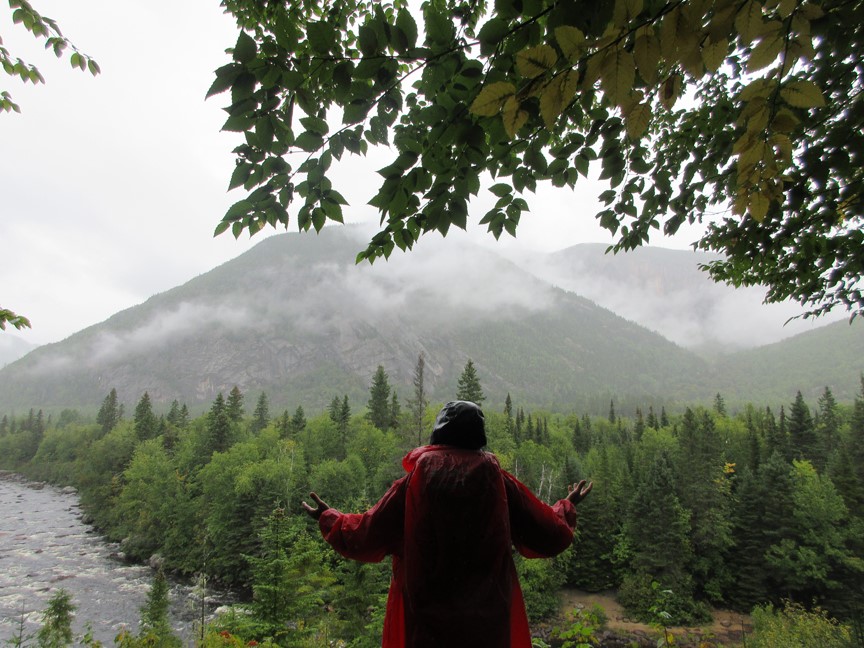 Those trails are indeed spectacular. But as they are within a natural parc they are often overcrowded and everything is over regulated. Just outside the parc you can find some lesser known trail where you can enjoy more freedom and fewer people. For your next trip may I suggest the Dôme (near the Mt du Lac des Cygnes, Parc des grands jardins), the Mt de l’alouette in the Zec des Martres, a very short trail to a naked summit, Also for a great challenge look at the ”traversée de Charlevoix” if you want to cross the backcountry for several days.

I left the region many years ago, but back then my favorite trail for difficulty and beauty was the Mt des Morios. It was a challenge just to find the trail and to get there but most of the time I had the hole mountain to my self.